The Twitter Hacks And Battles Of Plato, Socrates And Aristotle — Social Media Needs Blockchain To Prevent Hacks And Provide Permanence

Keld van Schreven, Co-Founder and Managing Director of publicly listed KR1 plc, looks at what social media might have been like 2,400 years ago and how it is can improve security and permanence.

Over the years we’ve seen Twitter celebrities get their accounts hacked. But this recent hack goes way beyond anything we’ve seen before. This latest security breach calls into question the security of Twitter and social media platforms and even the foundation technology they are built upon.

Social media is often castigated as a modern-day lynch mob running with pitchforks against anyone not falling into the latest ‘wokeness’. But for better or for worse social media fulfils a vital part of our society as being the platform for freedom of expression.

In doing this, social media really takes away power from centralised media corporations who now ironically often turn to Twitter first for news and opinion. Twitter’s original pitch to Silicon Valley venture capitalists was ‘The Pulse of the Planet’ and it’s achieved that.

However, social media has a few Achilles heels including regulations and as demonstrated in the past 24 hours, security. Just imagine if the hackers had got into Trump’s account and declared war on China. The US President has been on the warpath against social media recently and the impermanence of all the content. As a result, we may lose all our social media if these security breaches continue. This gives rise to what-ifs.

If Twitter would have existed in the Ancient Greek era imagine how fascinating that time would have been or any era for that matter. To see the pulse of the planet through history would be phenomenal. Imagine the tweetstorms of Plato, Socrates and Aristotle! What Twitter battles would have existed between Aristotle and Plato on the governance issues of the day, or just how bad the food was in the Forum. The minutiae of everyday life are fascinating to us all. It’s of no doubt that the tweets of the Ancient Greek philosophers of 2,400 years old would age very well, but they would also have been highly prized targets for hackers.

With greater security and permanence, we would be able to see the daily machinations of Plato’s mind and social life. Unfortunately for us the smartphone and the internet would have to wait another few thousand years to be invented. Also, rather like the hackers of today, history gets tampered with to suit the incumbent powers. Major historical works such as the Bible have been rewritten many times to suit the editors. It’s fair to say some of history may have been corrupted by rewriting and changes for political and financial ends. So, what if a technology came along that could solve that issue?

Well, it has, it’s called blockchain and because of this technology, social media could undergo a major structural change to make this insecurity and impermanence, more permanent and tamper-proof. Well, for as long as we last and the solar panels keep some computers running! This change may be in the new form of social media services or just a technology swop out of the incumbents like Twitter, TikTok and Instagram. It will be done by using blockchain technology and people won’t know about it.

Blockchain is autonomous software meaning it can run itself with minimal tending and offers a ‘write once, run forever’ dream. There is historical precedent in software terms here – if you were on the web in the mid-90s you may remember hearing about Java. Java was created in 1995 by Sun Microsystems and it promised a new language to ‘write once, run anywhere’ across the web.

Java succeeded because it solved many problems that developers regularly faced. Now twenty years later blockchain is offering the same dream but with a longer view in the mantra ‘write once, run forever.’ Blockchain services like Filecoin, a decentralised web host, will allow this to happen. Thousands of computers will host the main Filecoin software serving web pages forever as long as there are a handful of machines running it.

Blockchain is also tamper-proof, automated and has smart contract programmability making it accounting heaven. It’s also all mainly open-source software which means it gets the best chance of living forever too. Rather than stuck inside a corporate server gathering dust with a lack of manpower to keep innovating.

Medium, Substack, Twitter, Instagram, TikTok, Facebook are all in this group owned by corporations that are not open source. You can bet that in say 50 years there is a change of ownership or change in service status in these corporations and in 100 years they will probably not even exist. All that expression and history is gone. The reality is that the current social media services will be superseded by new platforms of expression. Just look at Myspace, a shell of the thriving community, by 2008 it was dethroned by Facebook.

For centralised services, someone has to pay for the servers to keep running. If the crowd moves off a platform you cannot sustain it. I had this experience with my own startup Diary.com which suffered from this. Users are fickle. There is talk that users will co-own some of these platforms, I don’t think that is the driver, but if they get paid for contributing that is different. Ownership hasn’t driven innovation before in these platforms. YouTube is leaking contributors to other platforms who offer a better share of revenue in the form of advertising revenue.

So who is game for this change? Incidentally, it is Jack Dorsey co-founder of Twitter who has a project at Twitter HQ called Blue Sky which is a decentralised version of Twitter to solve these security and impermanence issues and also to keep Twitter a free speech platform. Under threats from not only hackers but Donald Trump himself, Twitter could in future get censored and if that happened Jack would decentralize Twitter and move it onto a Filecoin type web host. Which means it’s secure, uncensored and it will live forever.

KR1 is a leading digital asset investment company supporting early-stage decentralised and open-source blockchain projects. Founded in 2016 and publicly traded in London (KR1:AQSE), KR1 has built a notable reputation for generating significant returns by investing in many key projects that are designed to power the decentralised platforms and protocols that are emerging to form new internet infrastructures. 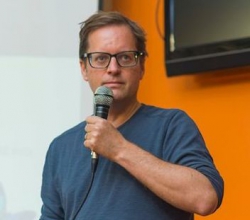 Co-Founder and Managing Partner at KR1
Keld has been involved in the tech industry since 1995 and Bitcoin since 2013. Previously, he has started several tech start-ups including SmartTrade App, a leading UK mobile payment app. Keld is a true advocate for the use of blockchain technology and a regular speaker at industry events, including Techcrunch and MoneyX.

Co-Founder and Managing Partner in Europe’s leading Blockchain Investment Company. KR1 is Europe’s leading digital asset investment company supporting early-stage decentralised and open-source blockchain projects. Founded in 2016, KR1 has been a notable first investor in many key projects that will power the decentralised platforms and protocols that form the emerging Web3 infrastructure. 50 investments since 2016 as of Summer 2020, multiple exits including Cosmos at x44.

Corcovado, a creative community focused on connection with the natural world, today announced a project called CorcoCoin to accelerate the...

The Blockchain and Cryptocurrency sectors are notorious for being some of the world’s most terrible industries for female representation. If...

Israeli blockchain company INX Limited got the green light for a security token sale of up to 130 million INX...

Inside the blockchain developer’s mind: The vertical scaling crisis

Bitcoin Doesn’t Need to Be a Medium of Exchange